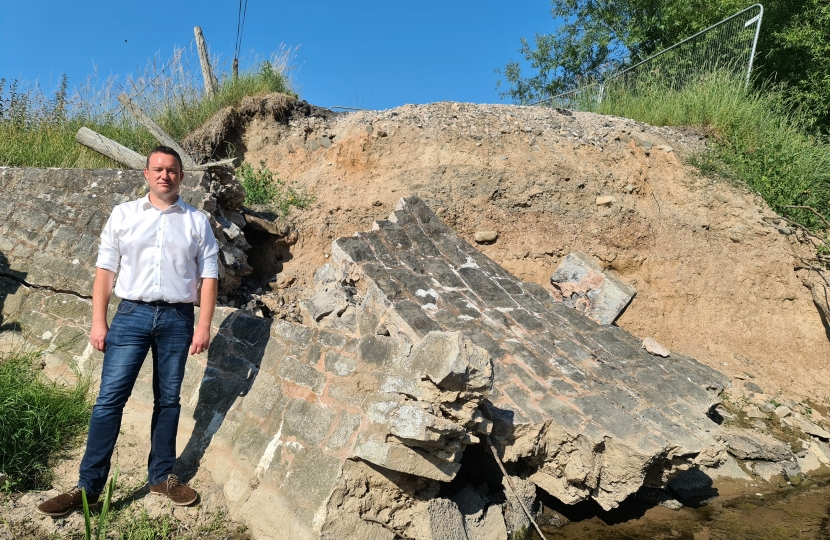 Gareth highlighted in the Senedd how residents of Trefnant and Tremeirchion have had enough of constant delays to the restoration of the bridge which was washed away by Storm Christoph in early 2021.  After raising the issue with both Denbighshire County Council and with the Welsh Government, he is frustrated that residents are being let down by both authorities passing the blame onto each other.

He directly asked the Deputy Minister for Climate Change if local residents can have clarity on when the bridge will be restored so people and businesses can get back and move and end two years of suffering faced by Trefnant and Tremeirchion.

In his statement, Gareth said:

‘’I am sick to the back teeth of being a tennis umpire as both the local authority and Welsh Government bat the ball of blame between each other. Residents deserve better from both authorities and this issue is deeply impacting the daily lives of so many people to not be seen as an urgency’’.

Gareth is determined to continue raising this issue with the Welsh Government and Denbighshire Council until the concerns of residents are addressed and the bridge is rebuilt.

The historic Llannerch Bridge between Trefnant and Tremeirchion collapsed due to the floodwaters of Storm Christoph in January 2021. The current estimated date for repairs to begin is summer 2023, this is not acceptable.

Transport for all in the Vale of Clwyd

The Welsh Labour Government has suspended all future road building. The three projects set to benefit North Wales have now been abandoned by the Welsh Government despite their pre-election pledge to invest in key road networks across North Wales.