Young pub owners get a shout out in the Senedd 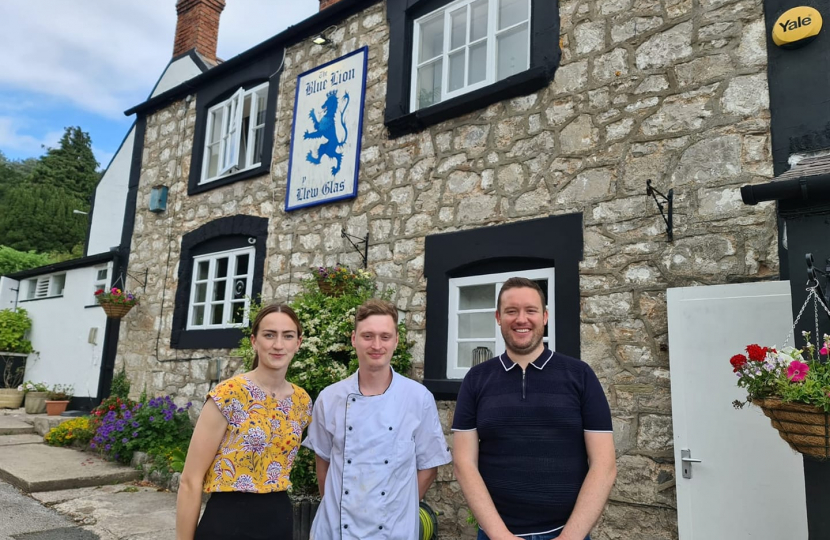 During this week’s First Ministers Questions the newly reopened Blue Lion in Cwm, Dyserth was highlighted to Mark Drakeford by the local Member of the Welsh Parliament, Gareth Davies MS.

Mr Davies when asking the First Minister what actions the Welsh Government is taking to support young entrepreneurs in Denbighshire highlighted the example set by Jonathan White, 27 and Megan Banks, 25 who on June 1st re-opened the doors of the popular local spot.

Mr Davies addressed the Senedd saying: “I recently visited the Blue Lion pub situated in Cwm, near Dyserth in Denbighshire, which has been taken on by new owners earlier this month.

“The pub, reportedly being the second oldest free house in Wales, has been reopened by young entrepreneurs, Jonathan White, aged 27, and Megan Banks, aged 25, who have worked locally in the food and hospitality industry for a number of years and have now taken the leap into managing their own establishment, contributing to the local economy and providing jobs for others.

Mark Drakeford responded with: “Well, I thank the Member for that question. I wouldn't like to get into a contest with him on pub visiting, but I visited a pub in Burry Port recently, which had equally been taken over by two young people, and making an enormous success of it.

“So, I congratulate his constituents for the work that they are doing and all those young people in Wales who have that initiative and that drive to make sure that, where they have contributions that they want to make, they find ways of doing it.”

The Blue Lion took to social media to share news of the unexpected attention given to their new owners. In a Facebook post which now has over 250 likes or interactions they shared the video clip from the chamber and said “It’s not every day you get a shout out during First Minister’s Questions at the Senedd!”

The Blue Lion is presently open from Monday to Sunday and serving food all day, to book a table you can call them on 01745 346188.