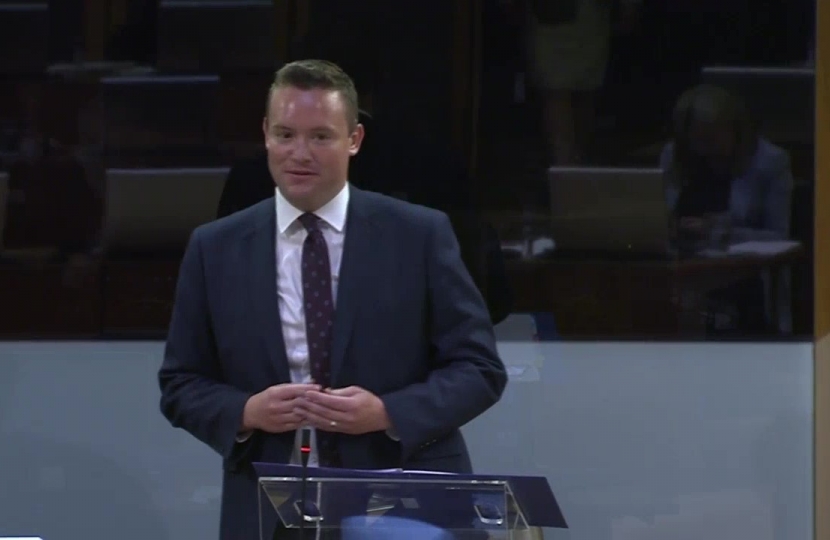 This week I challenged the Welsh Government to unveil their proposals for Social Care reforms. Unfortunately, we are none the wiser.

A week after the UK Government unveiled their plans to increase funding for Health and Care as well as reforms to Social Care payments, we have no clear plans from the Welsh Government.

Minutes before I was due to raise the matter with the First Minister during FMQs we received a written note from the health minister.

The 2-page edict can be condensed into a few words; we have no clue, so we are setting up a committee to look at this.

For years Welsh Labour have been calling for more money for Social Care and now, thanks to the UK Government’s Health & Social Care Levy, they are to receive an extra £0.7billion a year.

They’ve got the cash they wanted so it now high time that they got on with the job of delivering improvements to social care provision.

I am generally opposed to raising taxes, however given the urgent need to put more funding into social care and the state of public finances, I reluctantly agree that the UK Government had no other option to introduce the levy NI and dividends.

We are living longer but we are also living with more and more long-term health conditions.

Over the next few decades, the number of over 65’s will grow faster than those of working age. This will inevitably lead to greater demands on Social Care.

At the same time our nation is strapped for cash. The Covid-19 Pandemic required unbelievably large sums of money, which all had to be borrowed.

UK national debt now stands at a staggering £2.2 trillion, a number so big it is hard to comprehend.

Its 2 million million pounds or 2 with 12 zeros’ after it.

That’s not all, that number grows by £5190 every second. In the time since you started reading this article our debt has gone up by 2/3 of a million pounds.

We can’t therefore rely on borrowing to provide for the much need cash for Social Care. Unfortunately, there is no alternative but to raise the cash through taxation.

The Welsh Government don’t have to find ways of robbing Peter to pay Paul. They are getting almost an extra ¾ Billion pounds each year, ringfenced for Health & Social Care. The NHS doesn’t need extra cash, it already eats up half the Welsh Budget.

The First Minister must ensure that this money goes straight to the front line of Social Care. Afterall, many of the problems in our hospitals are as a direct result of a lack of social care provision.

Delayed Transfers of Care are one of the main reasons why Ambulances are queuing outside our hospitals and why some patients have spent 18 hours in the back of an Ambulance.

Wales now has the money; it just needs a plan. Welsh Government can’t continue to dither and delay.

We certainly don’t need another committee, we need a clear plan for Social Care today, not next year.

Welsh Conservative Member of the Welsh Parliament for Vale of Clwyd

Whether you are a photography pro or just like taking snaps on your phone, entries from all abilities welcome.

This year's theme is 'Winter in Vale of Clwyd'

Copyright 2021 Gareth Davies MS for the Vale of Clwyd. All rights reserved.
Powered by Bluetree