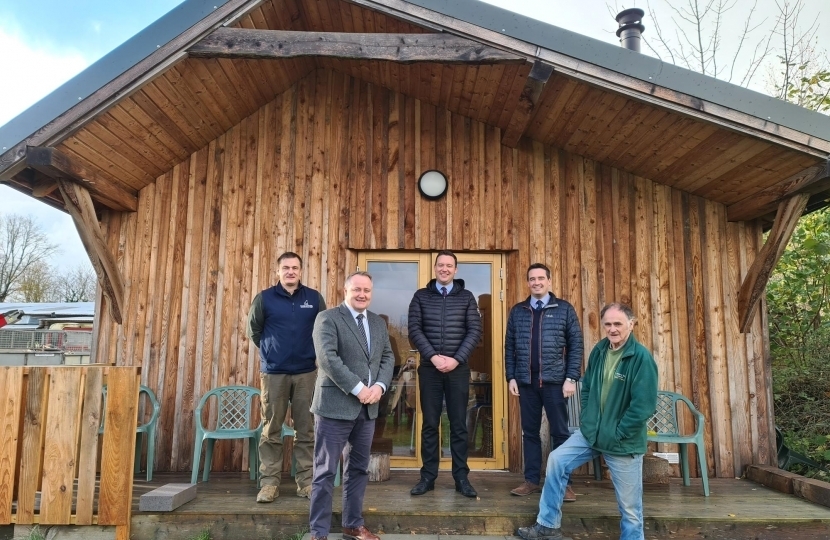 Three politicians visited Bodfari last week to find out more about how the Game and Wildlife Conservation Trust (GWCT) has linked up with the Woodland Skills Centre as part of their new four part woodland conservation project.

Vale of Clwyd MP Dr James Davies, Clwyd West MS Darren Millar and Vale of Clwyd MS Gareth Davies visited the Woodland Skills Centre, which is based in the heart of the Clwydian Range Area of Outstanding Natural Beauty, to learn more about the partnership from Lee Oliver, who is leading the Game and Wildlife Conservation Trust project, and Rod Waterfield, who set up the Woodland Skills Centre.

GWCT has joined together with the Woodland Skills Centre as part of their ‘Cynnal Coetir’ Elwy Valley Sustainable Management Scheme (SMS).

The Elwy valley SMS started life with The Deer Initiative and has since transferred to the GWCT. The project centres around an ever-growing population of Fallow deer, where in some areas they are having a negative effect on woodland regeneration.

However, it has now developed beyond a deer centred project to encompass all woodland threats for now and in the future.

The four parts of the scheme are: Landscape Woodland Management, Deer Movement and Impact research, Invasive Species, and Woodland Education, working with PhD students at Bangor University for the woodland surveys and the deer research.

Speaking after the visit, James said:

“It was a very informative visit and I was pleased to hear of all the work being carried out to protect our woodlands.

“We were told that the entire project area covers a vast 23,500 hectares to reflect the occurrence and movement of the deer population, and that they are working in partnership with Bangor University, who have 2 PhD and 2 Masters students working on the project.

“They also told us that the project involves working with schools and community groups to raise awareness of the challenges facing woodlands.

“I would like to thank both Lee and Rod for inviting us to the Woodland Skills Centre to find out more about the project and for all the great work they are doing.”

“The Woodland Skills Centre is a fantastic facility in an absolutely spectacular location. It was a pleasure to visit on Friday to learn more about its work with the Game and Wildlife Conservation Trust.

“As Wales Species Champion for the Red Squirrel, I was particularly pleased to hear that the scheme involves an invasive species control project.

“I commend both the Woodland Skills Centre and the Game and Wildlife Conservation Trust for all they are doing, particularly their efforts to educate more young people about wildlife and the woodland.”

“As well as learning about this fantastic project, we were also told about the impressive courses and traditional crafts they do at the Woodland Skills Centre, and also learnt more about the forest school for children, and the social prescribing the centre carries out, linked with Betsi Cadwaladr University Health Board.

“It is good to know that so much great work is being carried in the Vale of Clwyd to protect our woodlands and to educate future generations about the importance of conservation.”

Anyone wishing to find out more about the project can email project leader Lee Oliver: loliver@gwct.org.uk