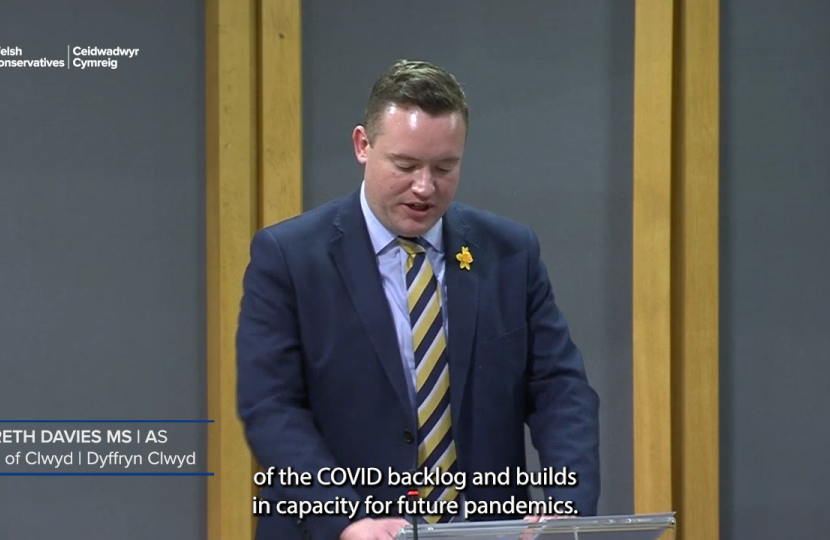 Vale of Clwyd MS, Gareth Davies, has used a short debate in the Welsh Parliament to call on the Government to improve access to healthcare.

A short debate allows Senedd Members to host a debate on any topic and Mr Davies used the opportunity to highlight the dire situation in relation to GP appointments and access to treatment in general. He was spurred into action after a recent survey of his constituents revealed large numbers of people struggling to get appointments.

"I was shocked at the number of people still struggling to access healthcare, but then again I shouldn't be surprised."

"During my decade of service on the NHS frontline, I witnessed first-hand the mismanagement from the top and the stress it was placing on staff.

"The problems existed well before the pandemic hit our shores and are a direct result of government failings, failings that they won't accept or learn from

"They might have increased recruitment in recent years but not in sufficient numbers. This has been highlighted by the RCN's recent report into safe staffing levels.

"I accept that the Minister is doing more than her predecessors but it's still not enough. Unless we get a grip on integrated workforce planning, tackling recruitment and retention, I fear for the future of our NHS."

To view the debate in full go to https://bit.ly/3sMuMk8

Gareth Davies MS welcomed constituents Josephine Roberts and Mai Solomon of Rhuddlan along with family members for a tour of the Senedd in Cardiff.