Vale of Clwyd MS launches petition to save HSBC in Denbigh 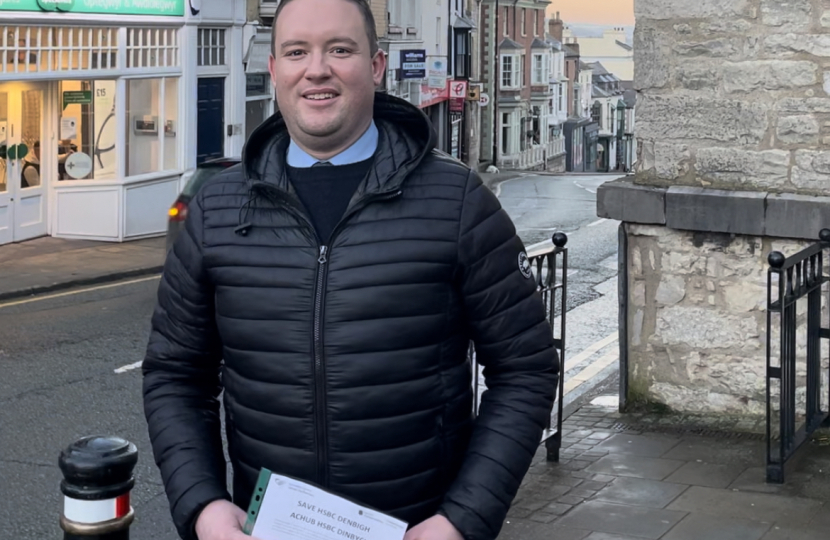 The local Member of the Senedd for Vale of Clwyd, Gareth Davies MS has launched his petition around the pubs, shops, cafes and businesses in Denbigh to encourage local people to sign his pledge to save HSBC in Denbigh.

It was announced in November that the HSBC branch in the town would close in Summer 2023 as part of a series of 144 national closures by the banking giant, leaving residents with just one bank remaining in Denbigh.

Commenting on the launch of his petition Gareth said, "the people of rural areas such as Denbigh need accessible banking facilities, as not everyone can access a car or public transport to travel as far as Ruthin or Rhyl to do their banking with HSBC. That's why it's important we keep rural branches open to give everyone the opportunity to bank locally as the Denbigh branch has a big catchment area."

Gareth went onto say, "I've launched my petition to businesses in the town to give local people the opportunity while they're shopping or having a drink, to have their say on the future of banking in the town and to send a message to HSBC that they need to change their minds, consider the people in rural communities better and keep the Denbigh branch open."

The petitions will be available to sign in all participating Denbigh businesses until Friday 3rd February or can be signed online via Gareth's website.