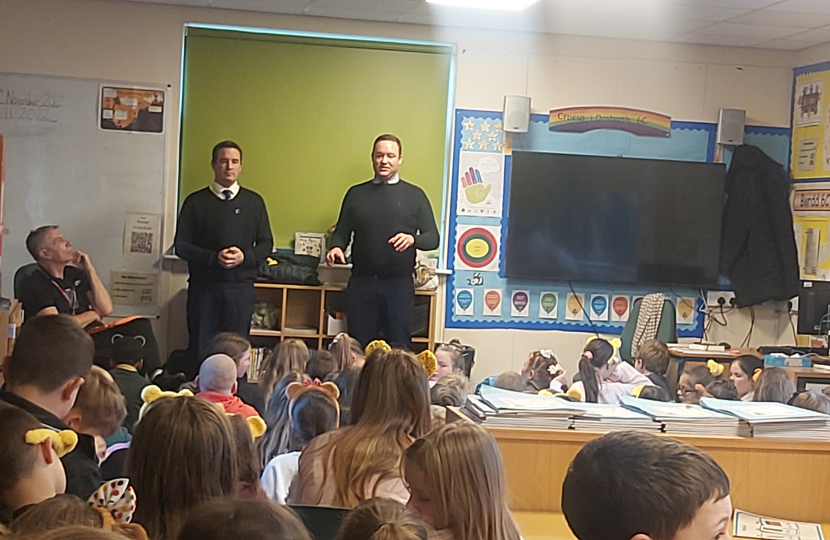 Gareth Davies MS for the Vale of Clwyd met with some of his youngest constituents during Ysgol Penmorfa’s Parliament Week. Pupils have studied the difference between the UK Parliament and the Senedd and were on hand to answer questions from Year 4 and 6 pupils. Gareth was impressed by what they learned and the knowledge they had of how politics works in Wales.

Additionally, pupils asked Gareth about the qualities of a Member of the Senedd, motivations for the role, and the challenges of being an MS. Gareth was also keen to share his own experiences, speaking about his background and why he decided to stand for the Senedd. He was also inspired by the interest pupils took in how the Welsh Government’s education policies impact their school and the broader Prestatyn area and discussed with pupils the improvements they would like to see.

They told Gareth about Life Skills classes, learning to be sustainable by growing their own food, and working with their hands in the school’s builder’s yard, which teaches them bricklaying and building electrical circuits. Gareth was glad that pupils were keen to showcase their school and how it provides a diverse range of subjects and skills.

As Gareth’s constituents, he was keen to bring their ideas to the Senedd and the Welsh Government, and following pupil’s expressing their interest in play facilities, Gareth has submitted a Written Question to the Minister for Finance and Local Government “Will the Minister outline what steps the Welsh Government are taking to maximise the use of playground facilities in Denbighshire?”.