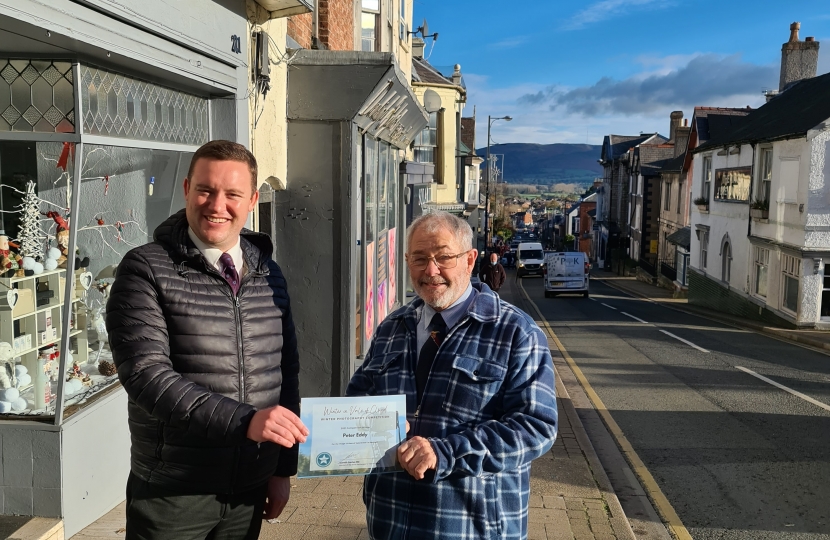 Gareth Davies MS has announced the winner of his 'Winter in Vale of Clwyd' photography competition as Mr Pete Eddy, aged 79 from Denbigh with his entry  ‘A view down Vale Street’.

The theme 'Winter in Vale of Clwyd’ was looking for snow-kissed scenes showcasing the beauty of the area in the winter season, with the winning photo to be featured on the politician's official Christmas Card for 2021.

Recipients of Gareth's card will include some local organisations and businesses, community leaders and politicians from across Wales and the UK including the Prime Minister, Boris Johnson.

The winning photographer also received a signed certificate and a £25 One4All gift voucher.

Gareth Davies joined Mr Eddy on Vale Street where the winning shot was taken to present him with his prize.

Pete said: “It’s nice to have your efforts appreciated. I have lived in Denbigh for 16 years; I think it’s a lovely town where people are very friendly, so I’m pleased to be able to help show part of it off in this way.”

“I’m not a professional photographer, taking photos in our area is just a hobby of mine. I also enjoy walking and it’s a privilege to be so close to these beautiful mountain ranges and landscapes”

“Thank you to everyone who sent in their brilliant photos for this competition, they were all of a high standard and so diverse and I really appreciate each one that I received”

“I chose Mr Eddy’s shot as I feel it encapsulated fully the ‘Winter in Vale of Clwyd’ theme, which was scenes showcasing the beauty of our area.”

“It’s a wonderful picture with an amazing wintery backdrop and in my opinion, showcases well how this constituency and our local area is a balance between populated towns and beautiful scenery, be it the hills more to the south as depicted in Pete’s photo down Vale Street, or with the beaches and coastline to the north of the Vale of Clwyd.”

See Mr Eddy's winning image in the attachment below.